Because dogs come with a myriad of common ailments, a frequently overlooked problem is when they have issues going on with their nose. In a lot of ways, this potential pitfall is actually more problematic than several of the other worrisome symptoms your pet may exhibit.

This is because a dog relies wholeheartedly on the effectiveness of its nose for an innumerable amount of tasks. A canine’s snout is moist because it is the peak point of sensory retrieval. The mucus that encapsulates the membrane directly affects not just smell, but proper cognition and nervous system function. In short, a dog’s nose serves as its primary source of direction as well as differentiating its feelings towards humans and other species. This is why when your furry friend meets a new dog, they are quick to exchange pleasantries with their noses.

But beyond just getting to know one another, it is crucial to health, mating, and establishing boundaries. Because of this, when your pet has a dry nose, it is something to pay close attention to. But why is it without moisture and what can be done about it?

TOP 3 Most Common Reasons For a Dry Dog Nose

Animals are exactly like humans as they pertain to allergies and pathogens that can disrupt their lifestyle. It is important to note that just because a dog has a dry nose does not mean they are allergic to something, but rather that their behavior should be monitored.

Repeated instances in which their snout is cracking or exhibiting discoloration is a huge hint that something they are ingesting is not corresponding properly with their immune system. This is no reason to panic, any more than when you get the sniffles from inhaling foreign agents. That said, just like when your nose is irritated, you prefer an immediate remedy. If your companion has a routine of displaying a nose that isn’t moist, change its bedding and do a thorough cleaning of its primary living space.

Be cognizant of the fact that certain cleaners might be the culprit as well. Some common instigators for animals that you can remove accordingly are foods that use additives instead of all natural ingredients, as well as plastics and dairy products.

Climate and elevation also play a role in how effective your pet’s nose functions. This is especially true if they are outside for extended periods of time in extreme heat or cold. In a lot of ways, cracked dog noses are similar to humans without sunscreen. Beyond an occasional lick of their own snout, there is no consistent protection for them to endure without being negatively affected.

Providing forms of shelter, be it a dog house or some type of shade goes much further than you think for the well being of their primary sense. Another good signal that your companion is being affected by the elements are changes in color to their tongues, as well as the thickness and shine of their coat of fur, should they have one.

A fresh bowl of water is not only vital to a moist nose, but greatly plays a hand in the overall health of most animals, particularly of the domesticated variety. Your companion needs its body to secrete enough fluid through their glands to ensure that their neural system is functioning flawlessly. While dogs routinely lick their nose to ‘freshen’ the senses, it is important to remember that not all pets have the ability to do so. For these breeds, it is even more important to periodically provide fresh water.

If you are in the unfortunate situation where you simply do not have the time to always check on fluid levels, perform an inspection on your animal’s gums. Pale, white, rough exteriors are telltale giveaways they do not have enough H20 in their diet. A good rule of thumb is to remind yourself that pink gums typically means a cracked nose is being caused by something else.

In extreme cases, your water supply may be the root of the issue, and if this concerns you enough it is a great idea to filter it. Sometimes a shriveled nose is simply from a loved one that has just woken up from his/her slumber.

Methods Of Dry Dog Nose Treatment You Should Avoid

Although many parallels have been drawn between owners and their furry counterparts, the similarities end when it comes to treatment. One must avoid the temptation to fix a dry nose with over the counter solutions like Neosporin, or seemingly practical items like baby oil. Both will achieve the unwanted outcome of nausea or diarrhea.

In limited doses both will not have lasting negative effects, unless a previous condition exists; however they both contain elements that are too difficult for dogs to digest. Additionally, petroleum jelly should also be left to the humans. Remember, canines groom and lick paws and themselves throughout the day, which, if given these solutions, will lead to routine stomach issues and vomiting.

The Remedy – My Personal Recommendation 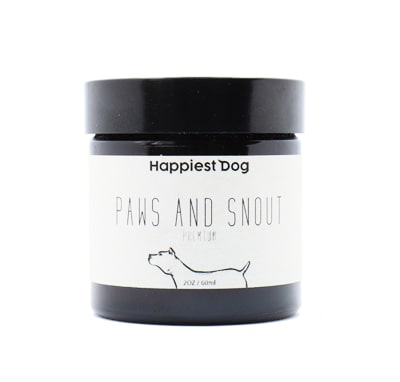 A dry nose here or there will obviously not render a grim diagnosis, but it is both prudent and recommended to care for them nonetheless since so much of their behavior is dictated by this sense. Occasionally owners opt for retail items like air purifiers to rectify the situation, but this is both unnecessary and ridiculously expensive.

Paws and Snout Premium Protection Balm by Happiest Dog is invaluable because it soothes and revitalizes the integral membranes they use daily. It is a solution that is lifted from only the finest and safest natural ingredients to concoct a blend that provides seamless protection all year long. Its organic, unrefined shea butter cools and softens a snout with special help from vitamins F, E and A.

It is a solid anti-inflammatory that fills in the cracks gradually while simultaneously ridding chapped, dry exteriors. Best of all, it can be licked and digested with ease so there is no need to worry about upset stomachs, granting you the ability to make your dog happy in any environment.

Can My Dog’s Nose Get Sunburnt?