There’s no need to feel nosey for being hugely interested in your dog’s nose. In the following few paragraphs, you will see how fascinating that wet snout of your four-legged friend really is! 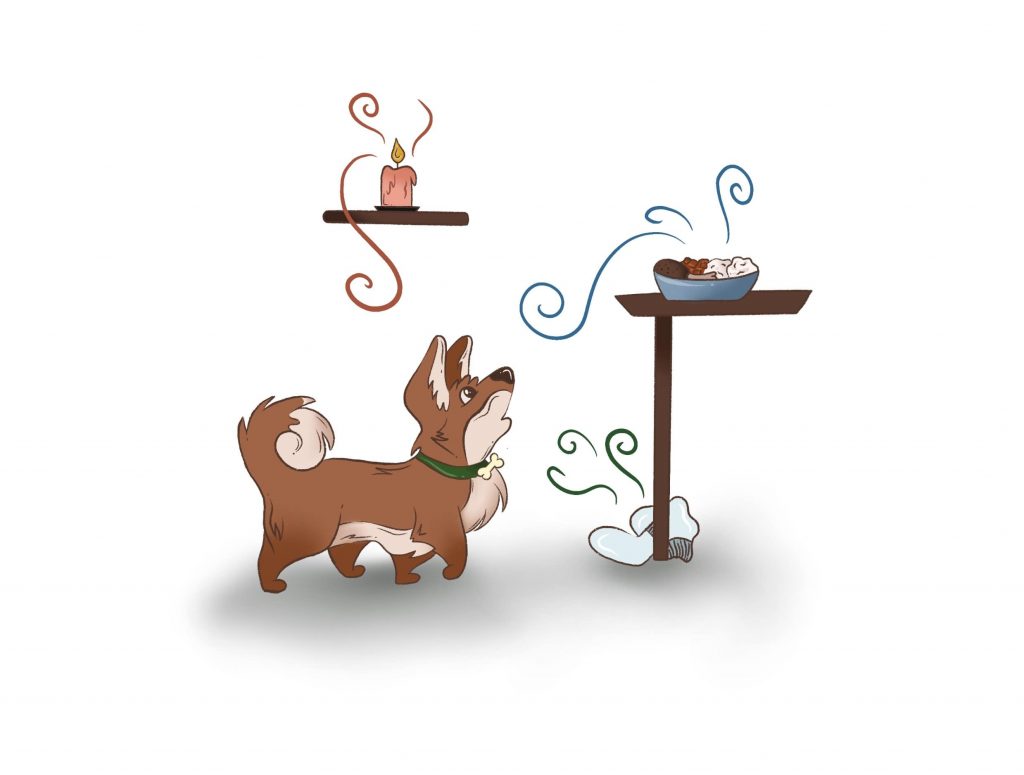 1. Dogs’ brain is adjusted for sniffing.

The dog brain is approximately in size equal to 1/10 of a human brain (as large as a tangerine). However, the part of the brain specializing in smelling is 40x more significant in dogs than humans! Moreover, they have 60 times more (300 million) olfactory receptors in their noses.

2. Dogs breathe in and out at the same time!

Unlike humans who can either breathe in OR out, dogs have a circular airflow system. They are capable of inhaling AND exhaling simultaneously. However, circular breathing can be learned to some extent as many wind instrument players practice and sometimes even master such skill to hold a tone for longer.

3. Dog’s nose print is like a human fingerprint, i.e., very much unique.

Just like you have your own unique fingerprints, your puppy has their one-of-a-kind nose print! Companies register these prints in certain parts of the world to help identify a dog when it goes missing.

4. They could detect half a teaspoon of sugar in an Olympic pool!

Dogs’ sense of smell is 10,000 to 100,000 times better. While a human can smell a particular food or fragrance, dogs can detect its respective ingredients.

5. Dogs smell separately with each nostril and thus smell in 3D!

Humans have a sense of 3D vision as they see separately with each of their eyes. These capture slightly different images, which then compile a final 3D picture of the world. The same applies to dogs’ nostrils; they can separately smell with each of them. Collecting different odors and compiling them into the “final smell.”

For dogs, it is essential to keep their noses wet either by licking them or via mucous. This, among other things, significantly heightens their sense of smell as they can now capture small scent particles which stick to their wet snout.

7. Dogs use different methods when sniffing.

When detecting slight air scents, dogs carry their heads high. However, when they try attempt tracking something, they keep their heads low and focus on disruptions in soil and broken vegetation.

8. Some breeds can have their own specialty when it comes to sniffing.

9. Dogs’ brain is not the only sign that they are built for smelling stuff.

The vomeronasal organ (VNO) or Jacobson’s organ located on the top of the dog’s nose acts as a sniffing organ helping to detect pheromones. This proves helpful when finding a mating partner or detecting danger. Furthermore, dog’s nose structure amplifies their smelling abilities. The intricate mazes created within their bones provide a larger area to capture scents.

10. The canine equivalent of tissue is their tongue.

Dogs can have runny noses too! However, unlike humans, they do not have a tissue on hand. As a result, they often use their tongues to lick the nasal discharge!

11. Dogs can smell the passage of time.

They are known to detect a slight difference in concentrations of odor molecules in the air. As a result, they can tell how long ago has someone passed that place and which direction they have gone to.

For example, the past occurrence of an object or a person is underfoot as odors from past days have already rested on the ground. Hence, you don’t have to be so sad to leave your dog at home as he can tell an approximate time at which you come back home, based on the concentration of your odor.

12. Their noses can separate air.

Canine noses separate air for either breathing or smelling purposes. They capture smell from “the part of the air, “which goes directly to the olfactory sensing area. This allows dogs to breathe out without disrupting the particles of odor with the exhaled air.

13. Dog noses can sniff many types of cancer, explosives, drugs…

Dogs have been trained to sense diabetic individuals thanks to their low blood sugar. However, it doesn’t end at diabetes. Odors typical for particular cancer types can be detected by dogs that undergo training and become medical detection dogs. However, dogs’ exceptional smelling abilities have also been used in police activity to detect explosives or illegal substances. The medical detection dogs are now trained to track the presence of Covid-19.

14. Their noses do not get wet automatically.

The wet snout of your dog does not come in a full package. Dogs’ noses get wet due to a combination of their sweat and nose licking. Some breeds as Pugs, however, might have a hard time licking their noses.

15. The breed of the dog affects their sniffing abilities.

The breed of a dog has a real impact on its sniffing ability. The best sniffers are long-nosed breeds like German Shepherds or Labradors, while flat-faced dogs like bulldogs or boxers are on the other end of the spectrum. This is because their smaller noses have fewer smell receptors.

Dogs, together with only a few other animals, including certain snakes and vampire bats, can detect heat with their noses. Thanks to that, they can detect even long-gone scents and track missing people or find out where a particular person has been.

18. Their sense of smell can detect human emotions!

As researchers have found, dogs can sense human emotions by looking at their pictures and detect anxiety, fear, or happiness based on their smell. That’s why you don’t want dogs to “feel that you fear them”!

19. Vertical items are more desirable to piss on!

While all the dogs like to mark their territory and remind other dogs that they’ve been there, pissing on vertical surfaces is far more desirable. This is due to the fact that they want to keep their odors at places at the height of other dogs’ noses. Moreover, urine has proven to last longer on vertical surfaces than horizontal ones.

20. Dog greetings are usually directed to butts and groins.

Both humans and dogs are more loaded with scents in their lower areas due to a high concentration of glands, and therefore pheromones. Moreover, dogs’ noses are placed at the height of humans’ groins, making it a natural destination for their attention!

Enjoy getting to know your dog’s nose and follow our other articles!