A dog takes in the world around them not through their eyes, but through their nose. With up to 300 million scent receptors, a dog’s sense of smell is extremely powerful, much more so than our own. In fact, it has been estimated that a dog’s smell can be up to 100,000 times more impressive than a human! 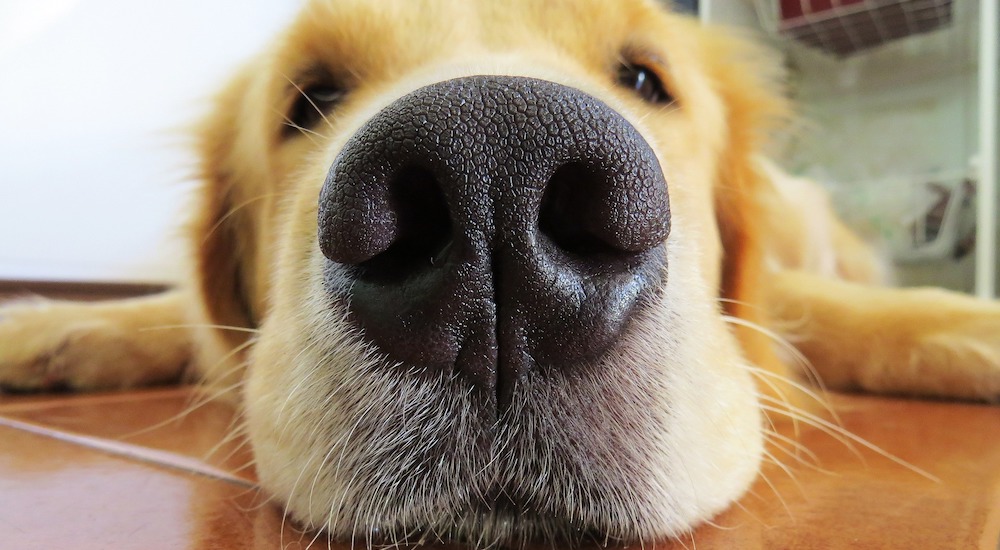 Dogs come in all shapes and sizes and so too do their noses, but the underlying anatomy is the same.

The dogs nose begins at the nasal planum, this is the hairless, pigmented area that is visible externally and is often referred to as the ‘button’ of the nose. A thick layer of keratinized epidermis covers the external dog nose and the nose is kept moist by secretions produces by the nasal glands.

The bony outer casing of the nose consists of the maxilla, nasal, and incisive bones.

As we move posteriorly, a dog’s nose becomes divided into two nostrils (nares), right and left, which are separated by a wall known as the septum. The more anterior part of the septum is cartilaginous in nature to allow for more flexibility and this septum becomes more ossified in nature as it extends posteriorly into the deep nose.

The nose itself is supported by a range of cartilaginous structures, ligaments, and muscles which all act to hold the nares open and allow for the movement and direction of the nose towards certain smells.

Each nostril contains a labyrinth of thin turbinate bones known as the nasal conchae. These provide a surface for the nasal epithelium, a layer of cells that line the nose, to attach to. The turbinates are intricately arranged and fold in random directions to increase the overall surface area for air to pass over and serve to create turbulence within the passing air. As air passes through these folds of bone, the air warms up. There are four nasal conchae: dorsal, ventral, middle and ethmoidal.

The passages between these conchae are described as meatuses, these can be thought of as the ducts through which air flows and that branch out as we move deeper into the nose. The first passageway is the common nasal meatus which lies adjacent to the nasal septum, this branches into the dorsal, middle, and ventral meatuses.

The nasal epithelium is the layer of tissue found attached to the complex network of folded turbinate bones. This tissue has various functions and the epithelial cells change in function as we move more posteriorly through the nasal cavity; in the anterior part of the nose, the epithelium is of the type that produces mucus, which traps any debris in the air thus preventing it from entering the airways.

In the posterior part of the nose, the epithelium is of the type that contains the scent, or olfactory, receptors. These are small neurones that extend hair-like projections called cilia into the air that passes through the nasal cavity. The cilia detect any odour molecules in the air and convert these stimuli into electrical impulses that are relayed to a brain area dedicated to olfaction, known as the olfactory lobe. It is here that the impulses are interpreted. It is thought that up to 30% of a dog’s brain is dedicated to analysing odour.

The paranasal sinuses are extensions of the nasal cavity and form air-filled blind-ending pockets found between the lamina of the bones of the skull.

In dogs, these sinuses are poorly developed. The maxillary sinus communicates directly with the dog’s nasal cavity. The frontal sinus Is the largest sinus in the dog.

Don’t forget to read the anatomy of dog paws too. It’s also impressive.